On November 11, 1965, Ray Wiswell, the first president of the MLCT sat down for a chat with Carl Sonnichsen. Having spent the previous year establishing the Land Trust and acquiring its first 37 acres of tidal marshlands, the Land Trust members were focused on learning more about these marshlands and the history of their use by farmers. Carl was eighty five years old and a long time, much respected, resident of Madison. He came here from Germany as a small boy. He was happy to recount experiences from his youth working on Moses Stannard’s farm “the old fashioned way” and the grueling work of harvesting grasses from the salt marshes in the late 1800s.

Carl recounted, “Well, at that time the marsh hay was considered quite important. It was used for many purposes. It fed the cattle, it bedded the various types of livestock…and it was used to bank up the houses to prevent any frost from entering into cellars…which were used for storage of the farm produce. It was considered a great value as fertilizer.”

“Everything was done by hand–mowing with scythes, raking, bringing it ashore. That was before we realized that horses could be worked on the meadows by fastening clogs to their feet, which kept them above ground when they was on soft meadow. We worked hard while we were down there, fighting mosquitoes and greenheads and mowing at a good clip all the time we were there.  When it came noontime we sat under a tree with our jug of cider and lunch.”

Carl explained that the grasses had to be dried for several days before being taken ashore, which was a risky time. “We had storms them days even more than we do now, and a good northeast wind would bring the tide water over the meadows.” The storms could carry the freshly cut hay to another man’s meadow, which sometimes caused feuds that ran between families for years. If the hay was washed down to the Sound it was lost and all the hard work was for nothing.

Sometimes the hay was stacked on wood structures built about three feet above the meadow and left to dry. 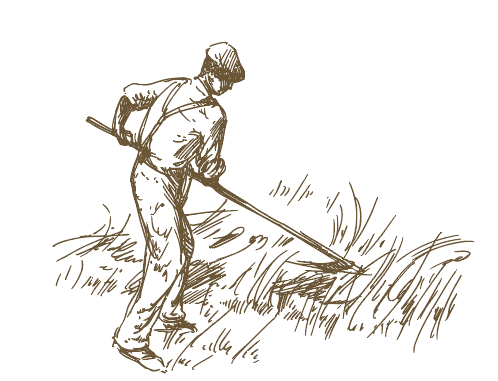 As part of our celebration of the Madison Land Conservation Trust’s first 50 years, we reached out to members asking them to share stories, photos or artifacts from the Land Trust’s history. We were thrilled to receive an immediate response from Lauren McManus who wrote, “My grandfather, Ray Wiswell, was one of the MLCT ‘Founding Fathers.’ I have books in my attic that he put together in the 60’s and 70’s labeled MLCT. I would be happy to donate them to you as you might recover some information of interest.”

Wiswell’s binders contain a wealth of records, maps and letters from those early years of the Land Trust including the transcript of an interview with Carl Sonnichsen about harvesting salt marsh hay from which this story is taken.

“When the ground was frozen, zero degree weather, you could take a pair of cattle and a wagon and go out there and bring the hay ashore. Coldest, most disagreeable thing in the world.”

Carl estimated that over 100 men would be working on the East River Meadows at one time. The School Meadow at the end of the East River meadows was considered a very good one. Carl recalled that the hay was sold to whoever did the most to harvest it and the proceeds went to the school system in Guilford.

“It was an important operation, you had to do it when the tides were right, when the weather was right, when other farm work wasn’t pressing, then you hurried down, cut the meadow grass and struggled hard to get it ashore before any storm developed.”

Ray Wiswell concluded his interview “Carl, this has all been a very interesting afternoon for me and I am sure that the records that we’ve made here will be of value to someone later on who may want to go back over some of the personal experiences and human interest stories about these marshes. Thank you very much Carl.”

It is quite possible to imagine Carl all those years ago with a horse and wagon cutting salt hay in what is now Madison’s Salt Meadow Park or in the salt marshes that now make up such an important part of the MLCT.

Read the transcript of original interview with Carl Sonnichsen 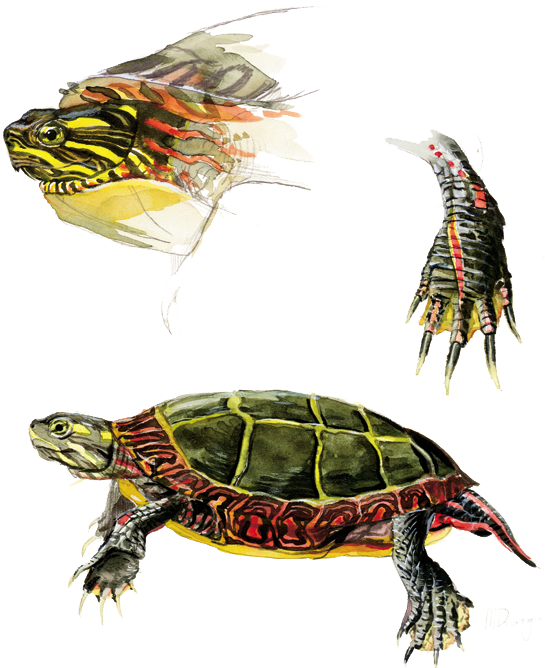 Although it wasn’t always so, the Eastern Painted turtle is now Connecticut’s most common species of turtle and one of only three native turtle species not included on the state’s list of Endangered, Threatened and Special Concern species. Frequently seen basking on logs and rocks—often in groups—in any permanent body of fresh water, the painted turtle’s smooth, dark, hand-sized shell belies a lot of color underneath: distinctive red markings rimming the edge, a yellow plastron, yellow stripes on their heads and necks, and red stripes on their bodies. The smaller adult males are easily identified by their extremely long front claws, used during courtship displays.

While painteds may be found on land at any time they’re not hibernating, females head for upland nesting sites en masse during late May and early June; watch for them on trails and roads. Amazingly, the freeze-tolerant hatchlings remain in their nests over the winter; you may find a newly-emerged, quarter-sized baby turtle at your feet very early in the spring!