Category: Short walk with several moderate climbs and descents
Start: Trailhead on Race Hill Road, North Madison
Distance: Round trip, including the loop, about 1.7 miles
Approximate Time: About 1.5 to 2 hours
Parking: On the west side of Race Hill Rd; parking area is not plowed in winter
Historical Feature: Remnants of a early bog iron works

The Ironwoods Preserve Trail leads through an interesting variety of ecological settings including open meadows, dry, rocky ridges and low, wet, valley bottom lands and streams. The trail leads to the foundation of an excellent example of a bog iron works dating from the late 18th or early 19th Century.

From the southern-most parking area walk toward the woods where you'll find the trail leading toward Greist Pond.

In the late 1700s, Henry Hill, Joseph Pyncheon and Redad Stone acquired a four-acre mill site on Joshua Blatchley’s farm. After 2 to 3 years as a sawmill it was converted to an iron works, which operated successfully until about 1820, by which time readily available bog iron ore and wood for charcoal had been quite depleted.

The iron works was small, the forge hearth being about 3 feet square and 1.5 to 2 feet deep with an open top. An air pipe entered one side about half way up. Next to the 16’ x 30’ forge building was a charcoal house about 14’ x 22’. The nearby mill was probably powered by an overshot wheel about 10’ x 4’ wide. The mill contained a large bellows and a heavy trip hammer and anvil.

In operation, the charcoal-fired forge reached high temperature aided by a continuous blast of cold air from the waterwheel-powered bellows. After being washed, pieces of bog iron ore the size of ping-pong balls were fed directly into the fire. At a temperature of 2600 to 2700 degrees fahrenheit, the silicon-based impurities melted and formed a liquid slag about the irregular agglomeration of iron. The molten slag was raked or drawn off. Tons of that slag still litter the site. After about 6 hours of this, the small lumps of ore became a spongy lump of malleable iron weighing about 30 to 40 pounds.

To further reduce the slag inclusions and to refine them, the hot iron was repeatedly drawn out into bar shapes under the weight of the drop hammer. Any remaining impurities ran lengthwise within the bar and provided great toughness and rust resistance.

Bog iron ore is a deposit of ferric hydroxide or limonite in the bottoms of ponds, swamps or bogs. These deposits result from the action of iron “fixing” bacteria that decay the swamp vegetation. Deposits range from the size of peas and cotton balls to solid layers, most often colored reddish or dark brown, and contained from 20 to 50% useable iron. Interestingly, the ore can regenerate in 5 to 25 years depending on the amount of decaying vegetation, the amount of iron in the water and on the condition for bacterial activity. 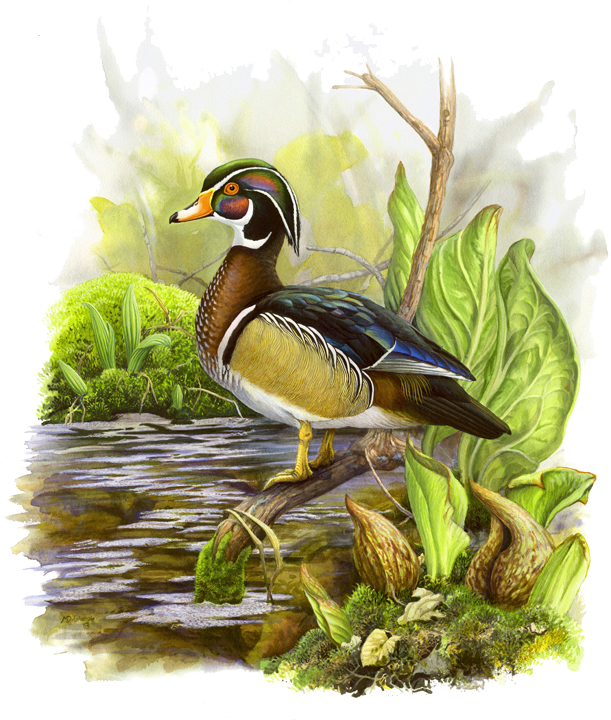 Wood ducks are among the most colorful water birds we have in Connecticut. They breed in wooded swamps and shallow ponds making their nests in cavities in trees close to water. One day after hatching, the ducklings climb to the entrance of the nest and jump to the ground. The mother calls them to follow her to the water. They can swim by the time they are 1 day old. Wood ducks were in decline a century ago but have begun to rebound due to installation of nesting boxes and habitat protection. If you are lucky, you might see some wood ducks on Greist Pond at the Ironwoods Preserve.