Located near the confluence of the East and Neck Rivers, The Ox Pasture Sanctuary is a 5.5 acre parcel of dry land surrounded by salt marsh. A raised viewing platform has been constructed on the site of the former A. Miner Lippincott private airstrip. The site is habitat to a variety of resident and migratory birds including osprey, northern harrier, glossy ibis, herons, waterfowl and other marsh birds. Mammals include otter, muskrat and the least shrew. Other estuarine marine life including the Diamond Backed Terrapin is present. A viewing platform is a short walk from the parking area along a gravel path. Tick avoidance measures are recommended. Poison ivy may be present.

What to look for on the Ox Pasture Sanctuary

The five and one-half acre parcel which the Land Trust has designated the “Ox Pasture” lies in the marsh area near the confluence of the East and Neck Rivers where Bailey Creek joins the Neck River. It is contiguous with other parcels held by the Trust – a total of approximately 90 acres in these marshes. The Ox Pasture Sanctuary itself is elevated dry land, surrounded by marsh with the exception of the access strip from Garnet Park. The observation platform is approached from trailhead to the east. The view from the platform reveals the course of Bailey Creek immediately to the west and north of the structure. Farther to the west, across the marsh, the East River is visible. The house on Grass Island, a classic shoreline landmark, can just be made out where the East River flows into Guilford Harbor. Across the marsh to the northwest lies Cedar Island and the northerly view is generally bounded by the Amtrak/Metro North tracks. The Neck River passes to the south of the platform. Insects, including ticks, are plentiful during warmer months. Efforts are made to control poison ivy along the trail and in the immediate vicinity of the viewing platform. Nevertheless poison ivy is quite common in the area and should be avoided at all times. 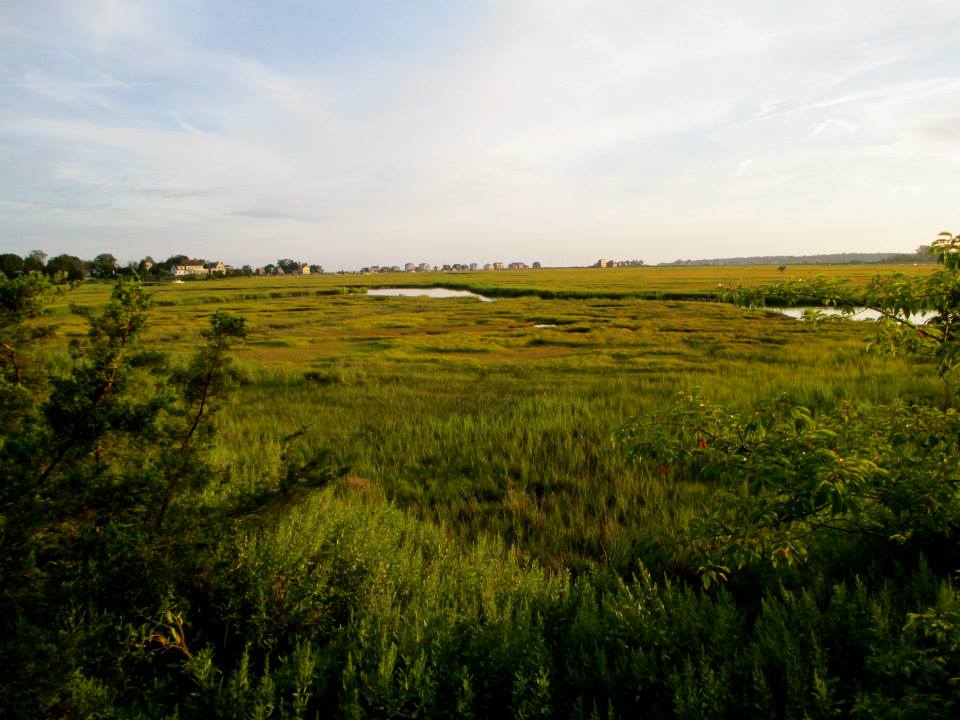 From colonial times even up to the early twentieth century, oxen were used to mow and haul salt hay in the marshes. The Ox Pasture is so named because it was used as pasture for these animals by early landowners, including members of two prominent Madison families, the Mungers and the Dudleys. This haying activity has a special resonance for Madison residents because of its portrayal in a classic WPA mural located in the Madison post office. Even earlier use of the property is evidenced by the presence of Native American “middens”, prehistoric deposits of clamshells and charcoal dating back at least to the 1400s. The first recorded purchase of the land was from the Hammonasset tribe in 1641.

In 1950, the property was acquired by Almon Miner Lippincott, a local house painter and avid aviation enthusiast.  His mother, Grace Lippincott, was well known as a published Madison poet. Lippincott was prohibited from using local public airfields because he was deaf and mute. He built a hangar and an airstrip long enough to accommodate his Piper Cub. He used these until he stopped flying in the early seventies. The hangar fell into disrepair. Nevertheless, before its eventual collapse, it remained a prominent landmark for canoeists of the lower Neck River and Bailey Creek. The concrete apron, which supported the hangar, still remains and today serves as the foundation for a wildlife observation platform, which was erected by the Trust. The MLCT acquired the property in1994. Part of the funding for the property was provided through a grant from the Long Island Sound License Plate Fund.

The Ox Pasture is a portion of the marsh complex of the East and Neck Rivers. Geologically, it is of relatively recent origin. Sequential retreats of the glaciers beginning about 22,000 years ago left two rocky deposits or moraines which eventually became Long Island and the Connecticut shoreline. The area between them formed a freshwater lake. About 11,000 years ago a break in the moraine drained the lake and allowed salt water to enter producing Long Island Sound. The evolution of sandy extensions and dunes formed barrier beaches or coastal strands such as the East River Beach that absorb the wave action of Long Island Sound and provide relatively calm environments, where sediments can settle, plants can root and tidal marshes develop. This development of the saltwater marshes including the Ox pasture only took place within the last few thousand years. (Source: Lapin report 1993)

Wildlife in the Ox Pasture is abundant although not always visible. It supports a population of turtles, muskrats, otters, rabbits as well as a variety of resident and migratory birds such as osprey, ducks, geese, herons and rails. Glossy ibis find the area particularly attractive. In the autumn the Ox Pasture acts as a land trap for the movement of migratory birds. It funnels them into a secure area before they begin the journey south. The area has abundant native grasses, which provide cover for small birds in their efforts to evade hawks migrating overhead. (Source: Noble Proctor 2000) The area has been identified as a refuge for at least two state endangered species: the diamond backed terrapin and the least shrew.

MLCT trails and properties are for hiking only. Dogs are allowed, but must be leashed. Please pick up all animal waste.