The Indian Rock Shelters trail offers an unusual opportunity to visit the natural rock shelter home sites of early Indigenous peoples. The trail encompasses a complex watershed system—which to the north flows into the Hammonassett River basin, and to the south, the headwaters of the Neck River. There are good views of cliff faces, rock shelters, and of Bartlett Pond.

What to look for on the Indian Rock Shelters Trail

The trail is a loop and is described as if walking in a counter-clockwise direction. From the trailhead, descend a short distance to the bottom of the slope and turn right (north) past a large beech tree with an unusual grafted branch. By looking to the left as you walk along you can see excellent views (especially in late fall, winter or early spring) of a rock ledge that runs more or less parallel with the trail and is on the other side of a low wet area. The forest composition in this narrow valley is quite diverse with beech, red and sugar maples, red, black, white and chestnut oaks, black and yellow birches, white ash and hickory.

The trail passes over broken rocks of ancient granite, and just to the right of a large rock outcrop. Note the imbedded vein of white quartz. To the left, the valley floor now slopes noticeably downward and to the north. The trail eventually passes just to the left of and along a stone wall—the western boundary of Southern Regional Water Authority land. From this point, follow the trail as it leads gradually to the west and onto the ridge of a hogback and then descends, crossing a small stream (0.4 mile from the trailhead). This stream, flowing north into the Hammonassett River watershed, originates in a wetland perched above and behind the ledge face to the southwest.

The trail now doubles sharply back southward (left) along the stream and close by the rock faces seen earlier. Soon it passes close to a magnificent rock shelter. As a winter home for an Indigenous family, this shelter was probably ideal as it faces away from winter storms and is close to a good source of water. The trail soon crosses the stream near where it enters the valley. A series of small waterfalls often occurs where the stream tumbles down over rocks, and in the winter sometimes creates a beautiful cascade of ice falls and icicles. 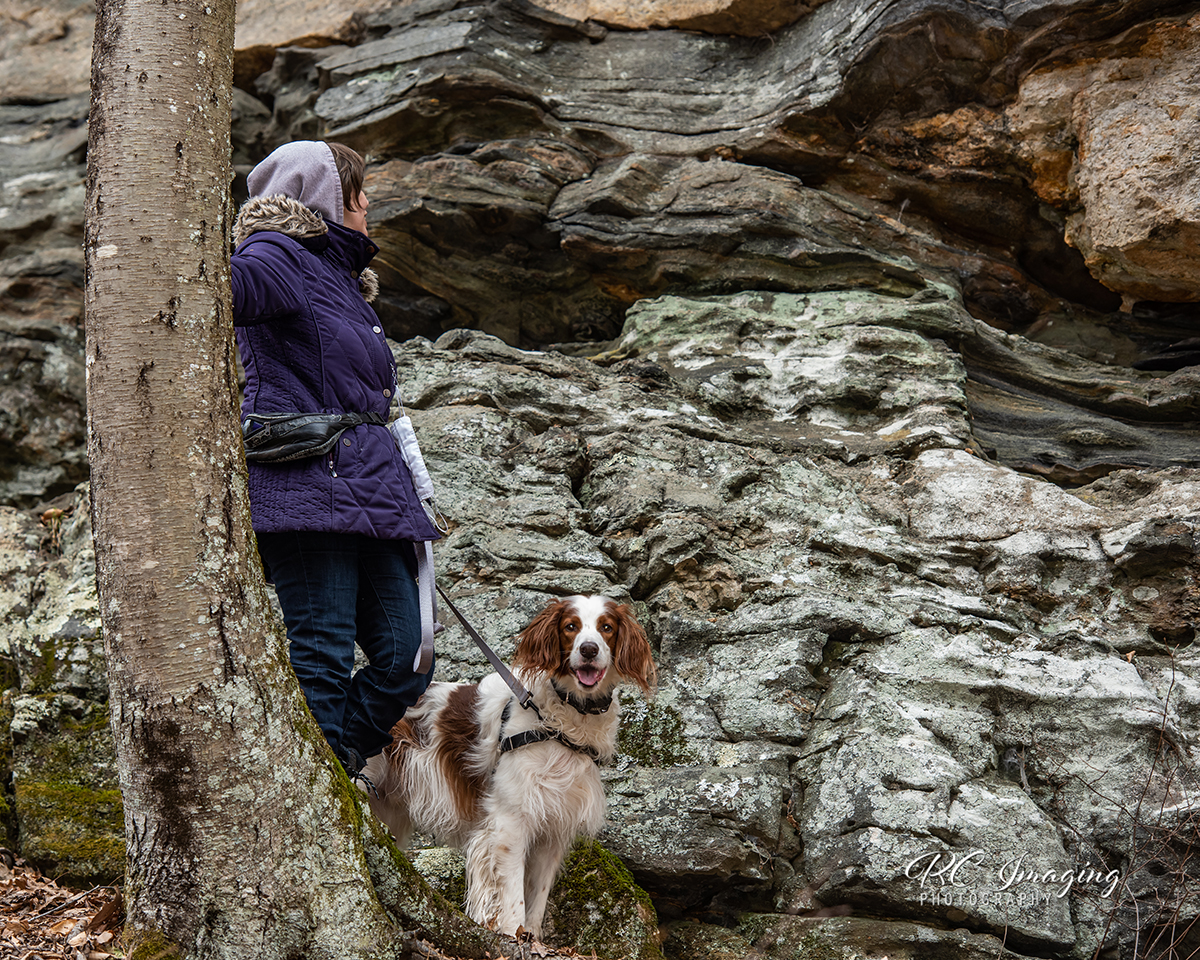 On this side of the valley, the forest floor is densely covered by ferns, while fallen tree trunks and rocks are blanketed by mosses. The trail here is quite rough as it passes over and around rocks that have fallen from the ledge faces. The trail soon enters a dense laurel thicket and then, close to a shear rock wall, an area rich in hemlock. Once a cool shaded glen, this area is now being opened up as many hemlocks are being damaged and killed by the hemlock woolly adelgid, a foreign insect that reached Connecticut’s southern shores in the mid-1980s.

There are several good examples on the cliff face where trees have become established in cracks in the rock. As tree roots grow they will cause rocks to split away and fall. The many large rocks at the cliff base suggest that this process has been underway for a long time.

Within the low wetland are what appear to be several large vernal pools, important habitat for several species of salamanders and frogs. The watershed now drains to the south and soon becomes more defined as the headwaters of the Neck River. A bit further along the trail passes close to another probable Indigenous rock shelter part way up the cliff face. The distinctive floor of light-colored, hard granite formed a plane of weakness with the softer rock above, and helps explain why this cave formed here.

Just past the cave, where the death of hemlock has created a large opening, the trail turns sharply east (left) and crosses the Neck River. The crossing can be difficult in times of high water. At the top of a small rise, the trail cuts back north (left) along another small hogback where fine veiws of the rock face can be seen. The trail then cuts to the east-southeast (right), then bearing right at a trail junction, ascends a spur trail to an overlook of Sunset Lake. This is an excellent spot to rest and enjoy the reflections. Return along the spur trail; at the junction, travel north through some magnificent beeches and oaks, cross the Neck River flowing from the pond, and return to the trailhead. Part of this last section passes over a narrow right-of-way, so please stay on the path. 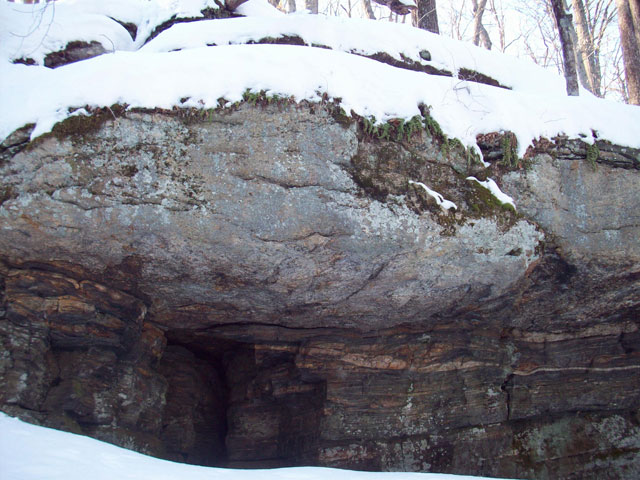