Category: Moderate walk with some rocky and root covered stretches.
Start: Trailhead 1, the recommended access to this parcel, is on the northern side of Opening Hill just west of Route 79.
Distance: About 1.2 miles.
Approximate Time: 1hour.
Parking: Near Trailhead 1 on Opening Hill Road.

What to look for on the Neck River Uplands Trails

This 115 acre preserve lies in the geographic center of Madison, immediately west of Route 79. It contains two parcels, one lying north of Route 80, the other, south.

The topography of the Uplands is determined by undulating bedrock, which forms very close ridges and plateaus oriented north-south. These features influence the flora and fauna of these areas. The dry plateaus and rocky ridges have thin soil, so rainwater quickly drains downhill, leaving little moisture behind. But slow-growing chestnut and red oaks, along with some beech and red maples, create a lacy canopy overhead. The fruits of these trees offer a high calorie source of fats and carbohydrates that help deer put on weight as colder weather approaches. Turkeys scratch and strut here, and chipmunks whistle as they scurry along old stone walls to store provisions for the winter. Squirrels and white-footed mice live comfortably on the acorns, and hickory and beech nuts, dropped from above. But the web of life in the Uplands allows birds and rodents to fall prey to coyotes and their smaller relatives, the foxes. Numerous rocky overhangs offer ideal den sites for these canines.

Trees on the plateaus do suffer from exposure and the dry conditions. The death of some benefits the many woodpeckers that work on these snags. The cavities they create provide nesting sites for themselves and others, such as chickadees. Fallen trees and logs provide dens for opossums and raccoons. Just below the trees, mountain laurel, witch hazel, and highbush blueberries make the most of any remaining moisture. And of course, the deer love to browse on the blueberries.

From the high areas, slopes divert run-off into streams. In the northern parcel, three beautiful creeks flow into the Neck River. Likewise, three smaller streams also make their way to the river in the southern property. These inclines limit shrub growth and result in more open areas. The cracks and crevices of many rocky outcrops offer shelter for bats and snakes. Increased moisture gives rise to a greater variety of trees. The slopes afford them some protection, so fewer snags develop. 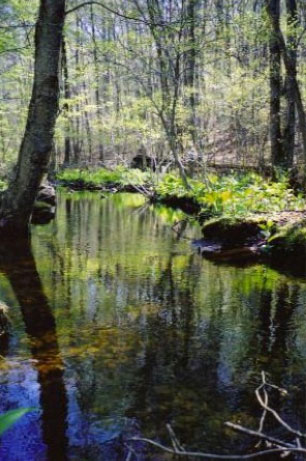 Both parcels contain the remains of historic roads. In the northern parcel, just west of Route 79, the Durham Turnpike makes its way parallel to Route 79. This roadway was in use by 1811, providing a connection between the Madison town green and Durham. In 1825, the Killingworth-Fair Haven Turnpike cut an east-west route across the Durham Turnpike. This runs parallel to Route 80 in the southern parcel.

Both of these areas provide so much to see and appreciate. Hikers, runners, and birdwatchers can enjoy the Uplands, and winter snow makes some of the trails suitable for snow shoeing and cross-country skiing.

These trails explore streams that flow between three plateaus. Upland areas are also traversed. Traveling south from Trailhead 1, hikers become familiar with most of the common features of this trail system. Tall tulip trees are part of the mixed hardwoods along this eastern-most tributary of the Neck River. Ferns cover wet, rocky areas along the stream, while massive rocky outcrops provide shelter and den sites for mammals.